BOTH JOBS AND SALARIES ON THE RISE FOR UNIVERSITY GRADUATES: LATEST STATS

Universities have called on Government to keep a “laser focus” on jobs and growth including by sustaining investment in university education and research to power Australia’s future prosperity.

But we are disappointed that Education Minister Simon Birmingham appears intent on talking down the strong performance of Australia’s universities.

“And over that past decade, our university system has expanded access to a record number of Australians from disadvantaged backgrounds. We now have tens of thousands more people from low-income, regional, rural and Indigenous backgrounds studying at university.”

Fewer than half of all students starting a degree are school-leavers coming straight from Year 12.

“Mature age and part-time students may take longer to complete their degrees because many of them are juggling study with full-time jobs, parenting and caring responsibilities,” Ms Robinson said.

“Let’s speak frankly. This type of criticism is really a Trojan horse for the Government’s crusade to impose new conditions on university funding as part of a broader plan to deliver Budget savings.”

The Government has pointed to graduate employment rates not having returned to the levels seen in the last decade – prior to the Global Financial Crisis. But this is because Australia’s economy is still recovering – and graduate jobs are strongly tied to the strength of the overall economy.

The Government’s own statistics confirm that the job rate for graduates three years after completing their degrees is at its highest level since 2013. Its statistics also confirm that median graduate salaries grew by 23 per cent over the past three years.

And the proportion of graduates working full-time and working in managerial or professional roles rose by 4.7 per cent over the past three years.

Meanwhile the overwhelming majority of graduates in full-time jobs – 79.2 per cent or almost four in five – felt they were “very well” or “well” prepared for employment.

“Where performance funding has been trialled in other countries, it has ultimately punished the universities that serve the most disadvantaged students and regions,” Ms Robinson said.

“Many of those schemes were subsequently abandoned because they backfire in that way.”

“Universities already have strong financial incentives to have their students complete and go on to successful careers – both their fee income and long-term returns from alumni hinge on this.” 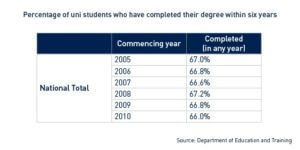 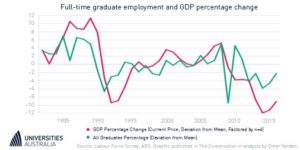 As the country faces a teachers’ shortage, Universities Australia has prepared a range of practical solutions to attract and retain the best and brightest.

“We applaud the action taken by the Tertiary Education Quality and Standards Agency to block access to 40 of the most visited academic cheating websites.

Australia’s universities are playing leading roles in responding to Indonesia’s foot-and-mouth outbreak – supporting our neighbours and helping stop the spread of the disease.