The unemployment rate amongst Australian university graduates fell in the past year, in a further sign of recovery for the graduate jobs market.

The jobless rate for graduates dropped to 3.2 per cent, according to data released by the Australian Bureau of Statistics – and compares to an 8.2 per cent rate for those without a post-school qualification.

“These numbers reinforce that beyond the many other benefits, having a university degree significantly reduces your chances of unemployment,” said Universities Australia Chief Executive Belinda Robinson.

“Australia’s universities are proud that the high-quality education they deliver helps people to transform lives, embark on new careers, and take vital new skills into a competitive job market.”

There are also significant variations in educational attainment levels across geographical areas.

Those who live in our major cities are twice as likely as people living in outer regional and remote areas to have a bachelor’s degree.

In May 2016, Australia’s major cities recorded university attainment rates of 42.2 per cent, compared to 17.2 per cent for outer regional areas and 19.1 per cent for remote and very remote areas.

“There is more to be done to lift university attainment for people living in Australia’s outer regional and remote areas – and our regional universities play a vital role in that task,” Ms Robinson said.

The data also shows that people with higher levels of educational attainment were more likely to be employed.

This compared with 67 per cent of people with Year 12 as their highest level of education.

Figure 1: Proportion of persons aged 25 to 34 years with a bachelor degree or above by remoteness area 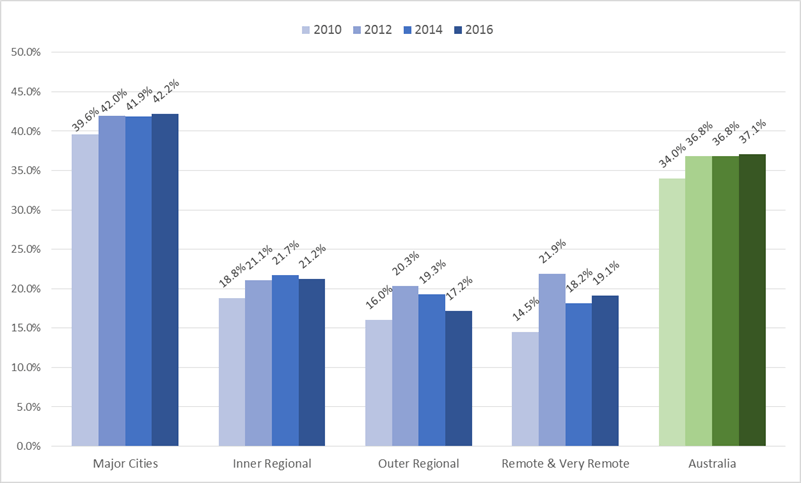