The education of international students generated a record $20.3 billion in export income for Australia in 2015/16 – up 8 per cent from the previous 12 months.

New data released by the Australian Bureau of Statistics confirms that universities and other tertiary institutions generated $13.7 billion of that income in 2015/16.

“Not only is international education a core component of Australia’s economy, it contributes profoundly to Australia’s relationships with the world,” said Universities Australia Chief Executive Belinda Robinson.

“Australia is a destination of choice for international students because of the quality of the world-class education on offer here, the outstanding student experience and our rich cultural diversity.  From great brains to great beaches, Australia has it all,” Ms Robinson said.

“Over the past 50 years, Australian universities have been the vanguard of Australia’s engagement with our region. The people-to-people links forged through international education create the country-to-country ties that help us all to prosper.”

“Through the exchange of students on a grand scale, we’re forging relationships that underpin our future diplomacy, trade, business links, cultural insight, and personal connections.”

More than 320,000 students from 130 countries are currently studying in Australia’s universities.

The new data comes ahead of the first meeting next Wednesday of the Turnbull Government’s Council for International Education, chaired by Education Minister Simon Birmingham.

Ms Robinson represents the sector on the council, which will help to strengthen Australia’s enviable reputation as a leading provider of international education.

Previous data has shown the enormous contribution that international students make to the economy and jobs in every Australian State and Territory.

Contribution of international education to employment and state/territory income, 2014-15 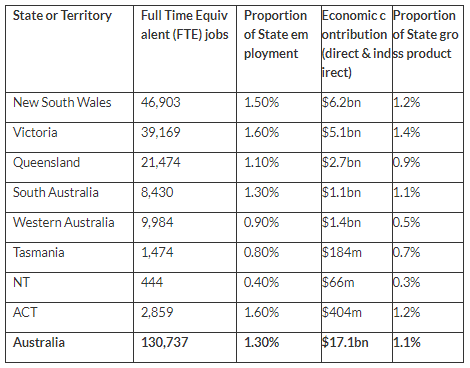 Source: Deloitte Access Economics. Note: These figures include the contribution associated with visiting friends and relatives. After accounting for the fact that some inputs to the goods and services consumed by international students and their visitors are imported, international education was estimated to contribute $17.1 billion to Australia’s GDP in 2014-15.

Deloitte has estimated the spillover benefits to regional economies of international students studying in capital cities.

Clever collaborations between Australia’s universities and businesses return almost $4.50 on average to companies for each dollar they invest.

Expertise & evidence are our best defence against future terrors

After a hellish summer of bushfires, floods, drought and coronavirus, the big challenges facing humanity are “at an alarming juncture” – and evidence and expertise will be crucial to solve them.