The Senate Education and Employment Committee released its final report on the proposed higher education legislation, along with dissenting reports by Labor and the Greens.

“Let’s be clear, this is a real cut to per student funding in real terms over the next four years and beyond. These cannot be absorbed by universities without affecting student services, infrastructure, university staff, and education programs.” Universities Australia Chief Executive Belinda Robinson said.

In South Australia alone, the legislation will result in $90 million being stripped from the state’s three public universities, with up to 220 job losses.*

“That’s the same number of jobs lost from the closure of Coca-Cola in South Australia – and would have even greater, longer-term economic impacts for the state,” she said.

“Australia is recognised as having one of the best higher education systems in the world and is the third most popular destination for international students. Why would you mess with something Australia does really well?”

The Senate report claimed that the legislation would “make the higher education system fairer, particularly for students from rural and regional locations, and low SES backgrounds.”

“In fact, the $1 billion cut will hit hardest the universities serving disadvantaged communities. These regional and outer metropolitan universities operate on smaller margins and have less diverse sources of income,” Ms Robinson said.

As part of its final submission to the Senate committee, Universities Australia also countered the Government’s claim that revenue – as distinct from Government funding – to universities would increase.

“This statement is based on projections that make ambitious assumptions,” she said.

“It assumes that the number of New Zealanders and other permanent residents at Australian universities would triple, despite no longer having access to a Commonwealth-supported place and instead being liable to pay full fees. 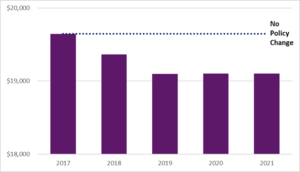 “If the legislation is passed, per student funding will drop. By 2021, Government funding per place will be 10.3 per cent lower in real terms than it is today.”

Universities Australia’s submission also counters the Government’s assertion that the cost for universities to deliver courses increased by 9.5 per cent, while funding per student grew by 15 per cent.

The Government’s own Deloitte report – on which that claim is based – says its figures cannot be used to make any such assertions about growth in revenue and costs over time.

“There is no evidence that teaching costs are declining or that universities are spending less on teaching,” Ms Robinson said.

*These figures are based on economic modelling done by the University of Adelaide.

As the country faces a teachers’ shortage, Universities Australia has prepared a range of practical solutions to attract and retain the best and brightest.

“We applaud the action taken by the Tertiary Education Quality and Standards Agency to block access to 40 of the most visited academic cheating websites.

Australia’s universities are playing leading roles in responding to Indonesia’s foot-and-mouth outbreak – supporting our neighbours and helping stop the spread of the disease.