More than four in five startup founders in Australia have a university education, the latest annual survey of one of the fastest growing areas of the economy confirms.

The 2017 Startup Muster report found a record 85 per cent of startup founders have a university qualification – up from around 84 per cent the previous year.

There are now more than 100 support programs for startups across Australia’s university sector.

“This data powerfully refutes the myth that entrepreneurs are mostly people who either never went to university – or dropped out during their studies,” she said.

“Once again, the largest annual survey of startup founders in our country actually shows that the overwhelming majority of startup entrepreneurs in Australia are university graduates.”

“Startups already contribute more than $160 billion to the Australian economy and this is projected to grow. Universities and their graduates will continue to play a vital role in that future growth.”

The report finds the top skills for founders were strongly linked to professional university-level skills.

These include software development (49 per cent), general business operations (57 per cent), marketing (32 per cent), data science (16 per cent), scientific research (12 per cent), and legal skills (11 per cent).

Startup Muster CEO and Co-founder Monica Wulff noted that nearly two out of five startups have had at least one intern in the past 12 months and often these are university students.

“For a student, an internship with a startup gives them firsthand experience and access into the startup community. Having direct access to a startup can be critical to founding their own startup in the future,” said Ms Wulff.

More than 2200 respondents took part in the 2017 survey, including 1184 startup founders and 472 who wanted to found a startup in the future. 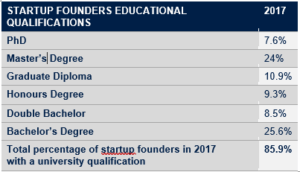 Universities Australia welcomes the appointment of Professor Peter Dawkins AO to the role of Interim Director of Jobs and Skills Australia.