Best of the best: university campaigns honoured in sector awards

Sending the story of cracking the cane toad genome global, a pitch to entice more STEM PhD students into industry and an inspired billion-dollar fundraising effort are among campaigns recognised in the sector’s highest awards for university storytellers.

The 2019 Universities Australia Marketing, Communications and Development (UAMCD) awards honour outstanding work in each of these three specialist fields of university operations.

Universities Australia’s Chief Executive Catriona Jackson said the awards, presented in Sydney today, recognise some of the best of the best in university storytelling.

“Universities must be able to tell the story of what we do – and to tell that story well — to the Australian public, to students and staff, to our global alumni, and to potential donors.”

“That storytelling relies on the expertise and passion of dedicated people who find the great work in our institutions – and share this news with the world.”

“Alan has led marketing and communications at UniSA for almost two and a half decades, overseeing student recruitment, media and public relations, marketing, alumni and fundraising in his many roles.”

“He’s a highly-deserving recipient of this prestigious honour, which is awarded to someone who has dedicated much of their career to senior leadership in these fields in the university sector.”

“UA congratulates Alan and all of this year’s award winners. Their impressive skill, expertise and dedication is clear from the quality of their work. Their passion for universities and the work they do is front and centre in their entries.”

“This straightforward campaign didn’t overthink things. Eschewing any temptation for institutional introspection, it got right to the point. These days you can do almost anything else on demand from your devices — from ridesharing to meals to movies. And now you can study that way too. It didn’t get lost in excessive brand self-reflection and spoke directly to students about why they should study online. Clear, direct and right to the point, its target market and audiences were clearly defined, and the work was well-informed with research, data and insights.”

“Getting more PhDs into industry is a challenging business problem to solve. Only 43% of PhDs enter industry and only 16% of the STEM workforce is female. Research insights and continuous testing of the creative shaped its messages, and they chose great hero talent with a female engineering industry PhD intern now working as a senior network engineer at Telstra. It generated good reach and a 30 percent bump in PhD applications year-on-year. A very practical and accessible campaign with no tickets on itself.”

“The planning and judgement of the Swinburne media team as it prepares responses to complex stories are a masterclass in clarity, consistency and conviction. The team anticipates the news, swiftly develops detailed plans, and distributes principled messaging with a commitment to share information rapidly with students and staff as well as with the wider public via the media. Its deft planning and upfront approach on difficult news stories has enabled the university to navigate challenging issues wisely and well.”

“This was classic comms, well executed. The UNSW in-house team took a dry research breakthrough – unlocking the DNA of the cane toad – and used the iconic status of the invasive Australian pest to give the story a hook to make it travel. Pre-shot video extended the reach, especially in social media, along with extensive pre-pitching under embargo to a very wide span of outlets in Australia and around the world. The audiences went into the millions, by raising the prospect that by cracking the genome, it could enable the eradication of the toxic animals with viruses in future.”

“The cheeky upstarts in ECU’s comms team put their researcher comms training into hyperdrive. They set an ambitious goal to double their uni’s publication rate with The Conversation. It took extensive work with researchers, convincing them of the benefits of publishing, running a masterclass and awards night, coaching researchers and building ties with TC’s editors to skill up authors and polish their copy. The publishing amp-up generated significant spin-off coverage in Tier 1 national and global media – which bolstered speaking and conference invitations and generated new industry collaboration leads for the researchers. Neatly done.”

The University of Sydney, Inspired

“By cracking the $1 billion mark in Australian university fundraising, reaching more than 64,000 donors worldwide, the Inspired campaign is truly ground-breaking. A huge initiative, delivered with technical precision, a sustained expert partnership between university and advancement leadership and an ambitious vision – was a decade in the making. It has changed what is possible in university philanthropy in this country: a game-changing campaign that has transformed the landscape, changing countless lives through philanthropy-funded research and scholarship.”

“This was the first major fundraising appeal in decades for RMIT. It chose the refurbishment of an iconic Melbourne venue – the legendary Capitol Theatre – reflecting the university’s creative arts specialisations and industry-engaged mission. It inspired 374 donors, raising $1.4 million over two years. There were some suggested refinements from the judges such as using a non-advancement champion, such as a student beneficiary, to front the fundraising ask but overall it was en pointe, brand-aware and targeted. The next challenge will be to nurture an ongoing relationship with these donors for the long term.”

“Alan Brideson has devoted almost two and a half decades of his career to lead marketing and communications at the University of South Australia. He has delivered: global brand exposure through team UniSA-Australia in the Santos Tour Down Under, two Unijams, countless high-impact television and cinema advertising campaigns, an Adelaide Crows sponsorship, the marketing strategy for a national launch of UniSA Online, revamps of the corporate website, the perpetual recreation of engaging course and study handbooks, school visits, student recruitment, and brand management. Alan has been a fixture of the University of South Australia for 23 years.

He’s worked under four very different Vice-Chancellors and stewarded the growth of its institutional brand from newborn SuperTafe to Australia’s University of Enterprise. He was the university’s first PR Manager safeguarding our logo, developing our branding style and recognisable tag lines. He then served as Director of Marketing and Development, creating the UniSA brand, overseeing student recruitment, media and public relations, marketing and communications, alumni and fundraising. His current role is Chief Marketing and Communications Officer – a role in which his leadership, innovation, respect and trust is clearly evident. Alan is a consummate professional and his corporate citizenship is palpable. Alan Brideson lives and breathes UniSA, its attributes, its character and its spirit. He goes in to battle for his university every single day, to win market share and increase brand awareness. Simply put, he’s the best.” 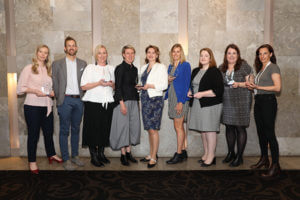